Visualizing Abolition and Freedom is more than a visiting artist’s contribution to public art at Grinnell College; it is a collaborative project that brought students, faculty, and staff together over a shared passion for both art and history. The piece itself consists of thirty-five resin blocks, each created by a different student or faculty member, in which the artist aimed to visualize a story, theme, or idea relating to slavery and freedom. Spearheaded by renowned Haitian artist Edouard Duval-Carrié, this piece examines themes of enslavement, abolition, and freedom through the lens of the Haitian Revolution of 1791. Although the piece originated with a study of Haiti, this project assumed a global perspective. By studying the Haitian Revolution from within the walls of a small and insular Midwestern college grappling with its own relationship to race and oppression, Grinnellians were able to connect themes from a seemingly extraneous subject to their own interests and experiences, finding relevance and meaning in unexpected ways. 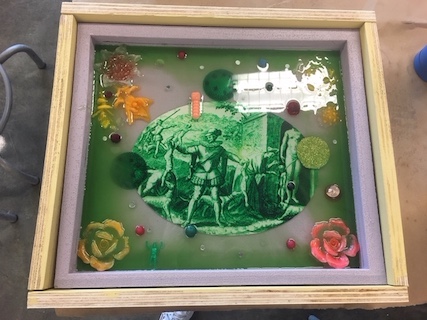 Miami-based Haitian artist Edouard Duval-Carrié first came to Grinnell in the spring of 2017 to speak about his art and scholarship at Duke University, where he pioneered a project called “History Embedded in Amber” in 2011. This project set the groundwork for Visualizing Abolition and Freedom, a piece which would use the same groundbreaking resin techniques devised by Duval-Carrié at Duke. Upon his return to Grinnell in the fall, Duval-Carrié assumed the role of visiting artist and helped us begin our own artistic journey here at Grinnell. Visualizing Abolition and Freedom would not have been possible without him, and we are eternally grateful for his commitment to bringing imaginative and innovative art and conversation to our school.

Visualizing Abolition and Freedom was born in a messy art studio in Grinnell College's Bucksbaum Center for the Arts, a room constantly bustling with students and faculty alike. 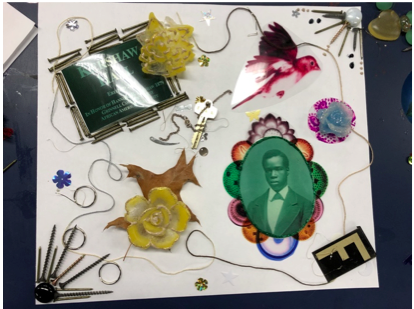 The project began with a large table covered in images; colorful cutouts of people, plants, landscapes, edifices, and much more covered the table along with baskets of found objects including keys, buttons, string, marbles, fabric, sequins, and shells. A seemingly infinite number of random objects began to overwhelm the studio, a multi-media dream. A group of students from a wide range of academic disciplines, enrolled in a short course led by Duval-Carrié, began to sift through the collection looking for inspiration. With our minds simultaneously focused on both Haiti and the Midwest, we each picked a theme or idea with which to begin our first block.

Each block began as a template; four pieces of wood, nailed together to create a shallow box, provided a skeleton in which a rubber frame was placed. 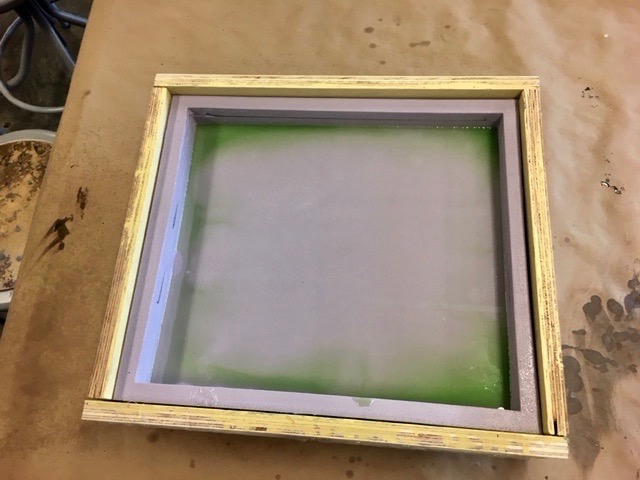 This template served as our canvas, a space for us to experiment with composition before eternalizing objects and images in rock-solid resin forever.

When we were happy with our final design, resin dyed with green paint was poured around the outer edges of the template, giving each block a green tinge. Clear resin was then poured to fill in the rest of the template. Before letting the resin dry, a blowtorch was used to heat the resin and pop any air bubbles created by the pour. A day later, the first layer of the block would be complete.

Each block was built from five consecutive layers of resin, creating an effect where images in the early layers appear farther from the viewer than images placed in the top layer. This element of depth produced visual interest and variety among the blocks, and also provided artists with an interesting technique through which to conceptualize stories and themes. 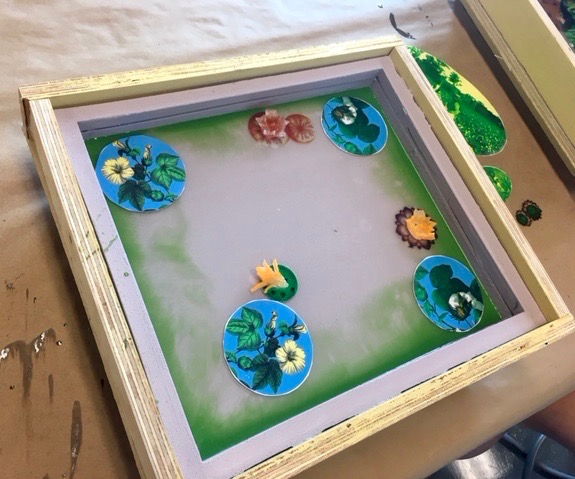 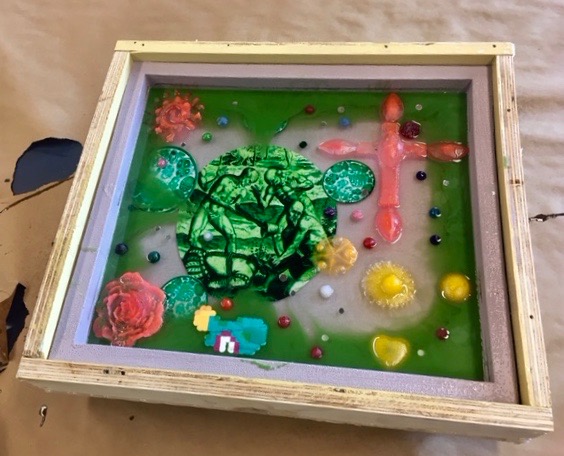 As the project began to take form, participation in Visualizing Abolition and Freedom was opened to the entire school. A first-year tutorial class, taught by Doug Hess, made this project a part of their class and facilitated an intersection between art and academics seldom seen in classes at Grinnell which are not specifically focused on art or art history. Professor Sarah Purcell's class, "History 100: Transatlantic Revolution: Us, France, Haiti", also participated as a class, and ultimately contributed four of the blocks in the final display. A student activist group, vocal about issues of race and class, also joined the project through recognizing the importance of artwork that creates conversation both inside and outside academic spheres. The collaborative nature of this project has thus resulted in a work of art different from any public art at Grinnell College. It functions not only as a proclamation of Grinnell's engagement with a prolific artist, but also as a statement of community and inclusion.